The government of Western Australia is not planning to review the state's mandatory bicycle helmet legislation, contrary to a report published in the local daily newspaper that raised eyebrows in 2006.

The following day, the newspaper ran a story indicating the West Australian government would review its mandatory helmet legislation in light of the research published by the BMJ.

The story quotes (now former State MP) Planning and Infrastructure Minister Allanah MacTiernan as saying the government would look very silly if it was not prepared to look at the research. However "looking at research" is not the same as agreeing to conduct a formal review.

Other data showing that the costs of WA's helmet legislation outweigh the benefits have been ignored by politicians.

A comprehensive study by University of Western Australia Roadwatch researcher Delia Hendrie and colleagues concluded: "In monetary terms, it is unlikely that the helmet wearing legislation would have achieved net savings of any sizeable magnitude."

The estimates (ranging from a net cost to the community of $15.1 million to a small net benefit of $2.0 million) were skewed to the negative, so the legislation has probably cost the community a substantial amount of money.

More importantly, the Hendrie evaluation considered only the effect on head injuries and the cost of helmets. More work would have been required to estimate the cost of reduced cycling.

In 2000, when Ms MacTiernan was shadow Transport Minister, she wrote a memo to colleague Julian Grill, a former transport minister:

"While we have publicly supported compulsory bicycle helmets there are concerns now being raised about the effectiveness of this policy. Research suggests that compulsory helmet legislation may be counterproductive in public health terms. It could be argued that any safety benefits to cyclists may be offset by the decrease in the number of people cycling as a result of being discouraged by the helmet legislation. There are significant implications for people's health, and subsequent health costs, due to reduced physical activity."

However, there is no evidence that on their return to government, the politicians ever did anything about these concerns.

On March 30 2006 - the same day the newspaper story was published - then Planning and Infrastructure Minister Allanah MacTiernan told the West Australian Parliament's Legislative Assembly that there will be no legislative review of WA's bicycle helmet law. Her answer to a question without notice included the comments:

The government has no plan to scrap the compulsory wearing of helmets. I acknowledge that I said to the journalist that we would always look at and assess the research on bike helmets. However, without having had an opportunity to look at the research, it seemed to us that scrapping them was not in keeping with the information that we had. In particular, I went to a lot of trouble to give her some data. I told her that national studies had shown that the participation rate for cycling in Western Australia was up at 13.8 per cent of the population and that Western Australia was doing very well compared with national figures. I also explained that we have counters for monitoring the Perth bicycle network and that the annual monitor had shown in the past four years that the use of the network had increased by 101 per cent. I also went on to explain to her that bike sales in Australia last year were 1.1 million, a 13 per cent increase over the number of new cars; that is, more bikes than cars are being purchased. I went on to say that her contention that people were not cycling more because they had to wear helmets was not supported by the evidence that we had to date, and that the evidence from the most recent surveys indicated that only one per cent of people cited the need to wear a helmet as the reason for not cycling. Lack of time, at 17 per cent, was cited as the most common reason. I gave that evidence to the journalist but it did not manage to find its way into the article. (...) The Australian Transport Safety Bureau reviewed 63 research papers on this topic and came to the conclusion that cyclists who do not always wear helmets are twice as likely to suffer serious injury and non-helmeted cyclists were three times more likely to do so.


An opinion poll of Perth listeners by ABC Radio (national government broadcaster) on the day the newspaper story was published (Thursday, March 30 2006) found that 44% want the legislation repealed and 56% are in favour of the law.

This bias is apparent from a 2001 survey in which more than 50% of survey respondents did not own a bicycle, were too old or didn't enjoy cycling in the first place. In one survey in 2000, 10% of respondents named the helmet law as their reason for not cycling - almost ten years after law enforcement. Many West Australians don't own a bicycle because they gave up cycling after 1992 law enforcement. It would be interesting to see the results of a survey of people who are able or wish to cycle in the first place.

In 2000, the Australian Bicycle Council estimated 4% of the Perth population cycle on an average day. This proportion should be compared against the proportion cycling in a sample of other countries without mandatory helmet laws: Netherlands 30%, Denmark 20%, Germany 12%, Switzerland 10%, Sweden 10%, Austria 9%, Germany 8%, England/Wales 8%, France 5%, Italy 5%. Research published in 2007 suggests Australia has the worst public cycling participation rate in the world.

It also ignores the overwhelming anecdotal evidence that since 2000 there has been a significant increase in the number of Perth cyclists riding without a helmet. Particularly in low to middle income and middle to outer suburban areas, it is clear the majority of cyclists now ignore the law and cycle bareheaded with police enforcement not apparent.

Western Australia has experienced greater than 25% population growth since 1992 with growth well over 50% in the inner city districts where the bicycle network surveys are mostly conducted. Petrol prices have more than doubled since 1992 and the WA government has spent millions of dollars promoting bicycle use.

To its credit, the government has built hundreds of kilometres of new cyclepaths through and around Perth over the past ten years, taking many cyclists off motorways. The surveys on these paths reflect the growing number of people choosing to use new cycle paths rather than roads (which are not surveyed).

A mid-90s telephone survey of adults in Western Australia found a figure equivalent to 64% of adult cyclists would ride more if not legally required to wear a helmet. There is substantial anecdotal and survey evidence that if the government had repealed mandatory bicycle helmet laws in 2000, the increase in public cycling participation since then would have been much greater.

Dr Robinson is a respected statistician who, as part of a team of researchers at the University of New England (UNE), has written or co-written 31 peer-reviewed papers on statistical analysis, modelling and genetics. These have been published since 1990 as UNE research in leading Australian and international journals and conference proceedings (e.g Australian Journal of Agricultural Research, Journal of Animal Science).

Dr Robinson has formally changed jobs since writing the BMJ paper. Although she still works on campus, she is no longer formally affiliated with the UNE. Consequently, when interviewed for the Paul Murray stories in The West Australian newspaper, Dr Robinson requested that her bicycle helmet research be attributed to her connection with the Bicycle Helmet Research Foundation incorporated in Britain.

The fact that Paul Murray did not report this in his story appears to have been used as an excuse by the minister for ignoring the research and data presented in the newspaper.

However, no excuse has been provided for continuing to ignore the comprehensive study (PDF 432kb) published in 1999 by Delia Hendrie and colleagues that estimated any benefits of WA's helmet law were tiny and insignificant compared to the costs incurred because of legislation.

Below is The West Australian newspaper analysis published on March 29, 2006, including a call for a parliamentary inquiry into the helmet legislation. 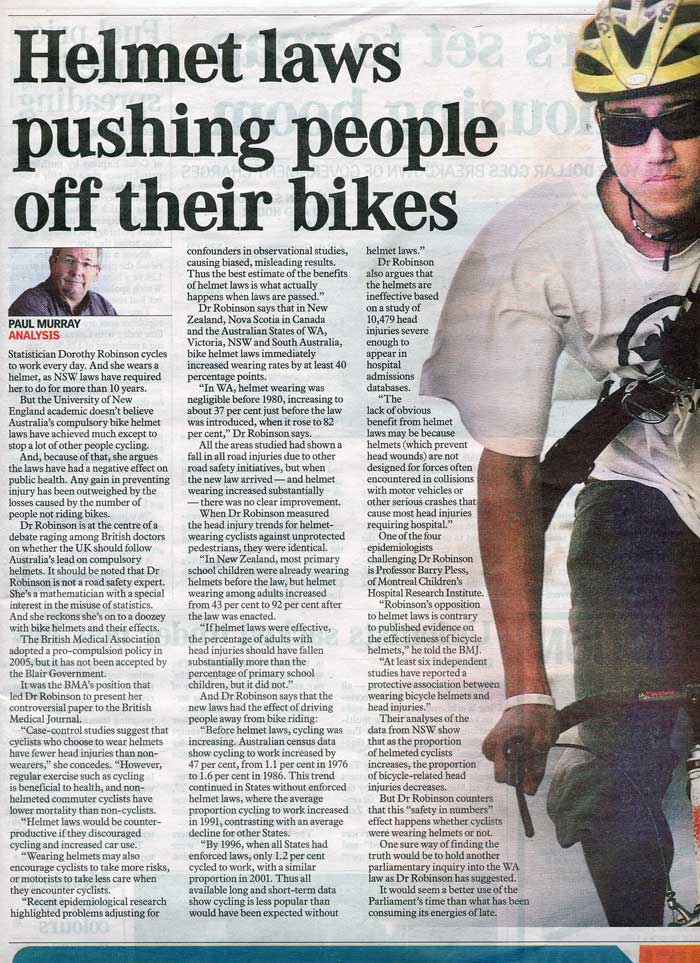 Below is The West Australian newspaper story published on March 30, 2006, suggesting the government will review its mandatory bicycle helmet legislation. 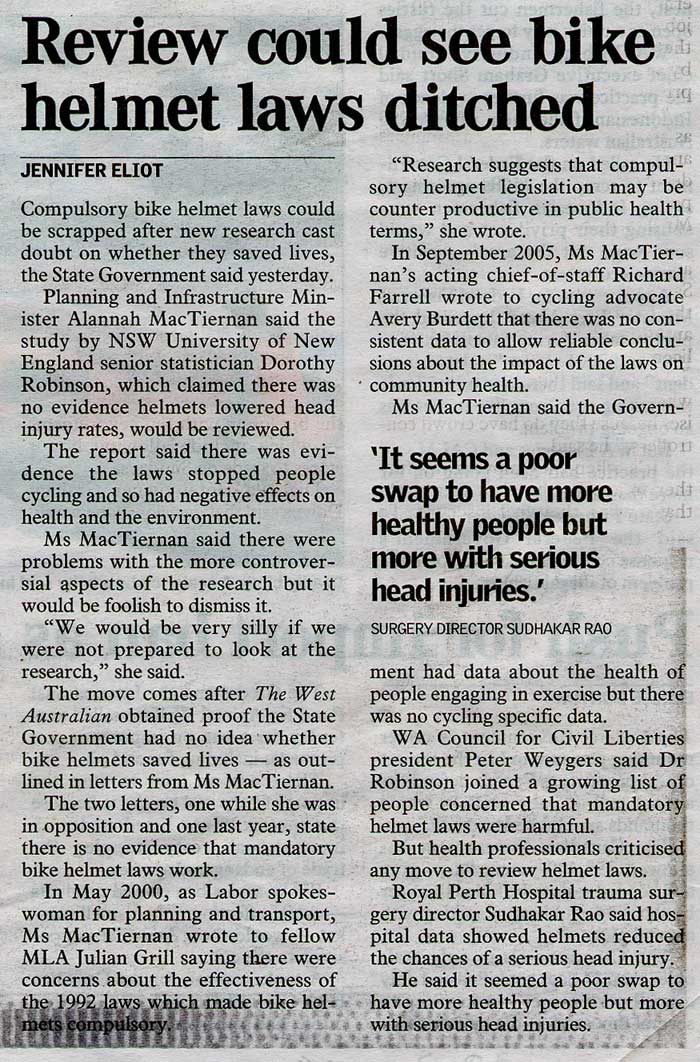 There has been nothing published re a government review of the British Medical Journal report since the story above on 30 March 2006 and - today.


However, the story below was published by The West Australian newspaper on April 4, 2008. 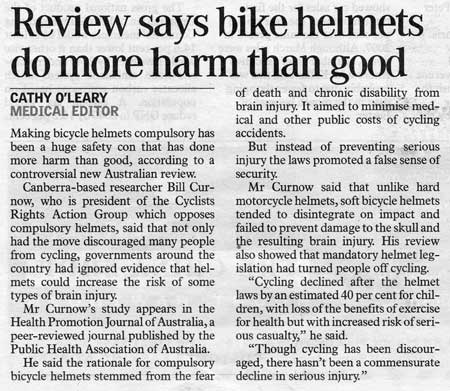