Government surveys suggest 24.5% fewer daily bicycle trips in 2015 than in 1985/86 by Australians aged 9+, despite 49.7% population growth in the 30 years since the pre-helmet law survey was conducted.

In 2015 and since a national strategy to double cycling participation was launched in 2011, the data show almost a million fewer Australians of all ages riding a bike at least once per year.

This analysis presents official records of cyclist numbers in Australia in 1985/86, 2011 and 2015. Data sources are Day to Day Travel in Australia 1985-86, the 2011 National Cycling Participation survey and the 2015 National Cycling Participation survey which expands the 2011 Census baseline by weighting it to the estimated resident population of 30 June 2014 for its estimates of numbers of persons cycling.

The 2015 National Cycling Participation survey was conducted in March and April 2015, the most popular months of the year for cycling, and is the official data source for the Federal Government's National Cycling Strategy 2011-2016.

The National Cycling Strategy aims to double Australian cycling participation from 2011 to 2016, requiring growth of about 15% per annum. The National Cycling Strategy Implementation Report 2015, published by the Australian Bicycle Council and Austroads in September 2016, confirms the failure of the strategy with a reduction rather than increase in Australian cycling from 2011 to 2015 despite improved bicycle infrastructure and promotional campaigns, including references to helmet laws being an obstacle to cycling participation and safety (see opinion).

The NCP surveyed a smaller number of household respondents in 2015 than in 2011 and, as demonstrated in the chart below, there is a consistent bias toward NSW in the national averages. The NSW sample sizes were much larger than other states as data from a separate survey instrument was used for metropolitan Sydney in 2015, and in Queensland additional sampling was undertaken in metropolitan Brisbane. 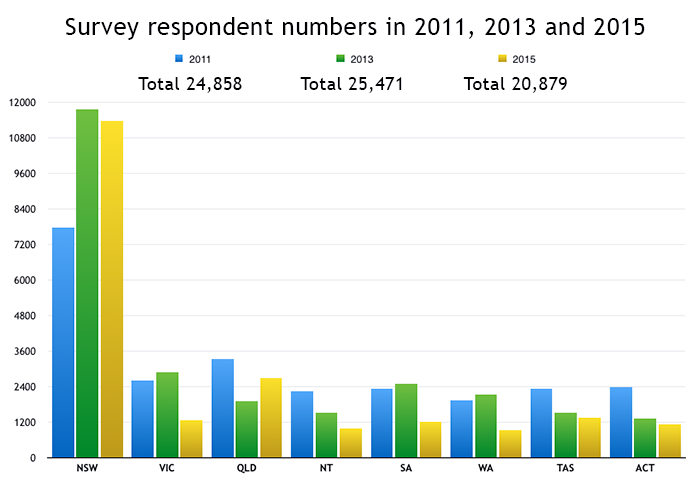 In 2015 a significantly larger number of people were interviewed in NSW and particularly Sydney than in all other states combined, and it is relevant that governments spent $115.3 million on NSW cycling infrastructure from 2011/11 to 2013/14, including $3,940,000 in the Sydney region during 2013/14 (source).

The 2015 National Cycling Participation survey has re-weighted to population the participation percentage findings from its 2011 and 2013 reports, so data below may not seem the same as in the 2011 and 2013 analyses or NCP reports. 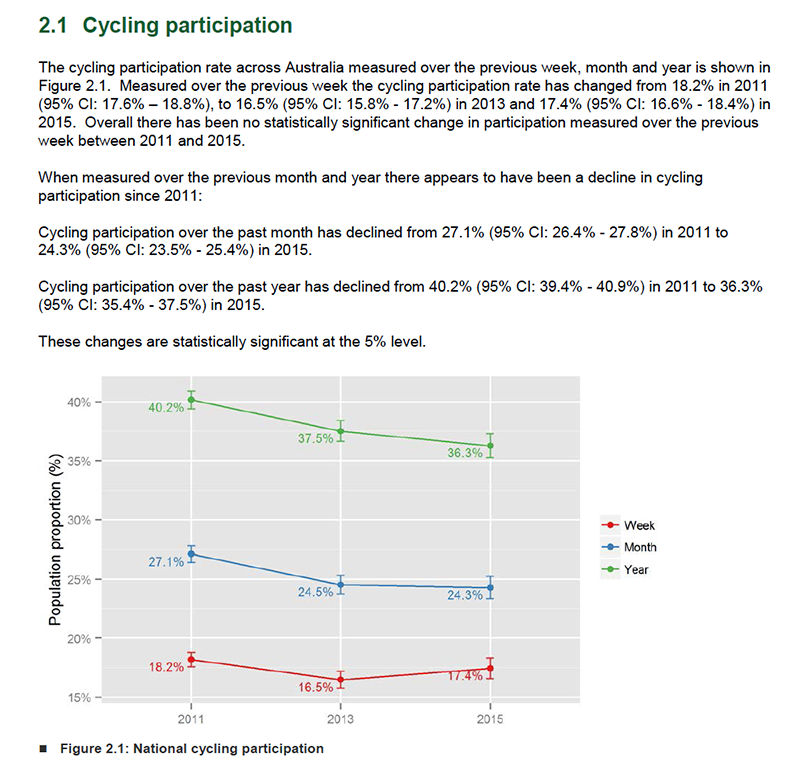 The average number of minutes cycled over the past week by those who had ridden (NCP 2011 Figure 4.2 / NCP 2015 state reports Table A.1) suggests there has been a substantial decline (-19.1%) in the number of times (or length of time) that Australians cycled between 2011 and 2015.

These figures suggest an increase in Australian weekly cycling participation since 2013 but still a significant decline since 2011.

Listed below are the state/national percentages and actual increase or decrease in numbers of people who had cycled at least once in the previous month:

When the proportion of different ages in each state is taken into account, the national monthly participation decrease was -550,906 from 2011 to 2015 (see spreadsheet (Excel 540kb).

Listed below are the state/national percentages and actual increase or decrease in numbers of people who had cycled at least once in the previous year:

The 2011 and 2015 NCP survey results provide age and state breakdowns that can be used to estimate daily bicycle trips and number of days ridden, enabling a rough comparison between each other and with the daily bike trip calculations of the pre-law CR69 Day-to-Day Travel in Australia 1985/86 survey.

"Trips: Cycling around in the backyard, on the street, on a velodrome or in a park counts as one trip per session.". (Source: NCP 2011 p8)

The NCP 2013 survey reported a national average 2.9 days were ridden per week by those who cycled in the past week (as extracted lower on this page). This compares with the 2011 national average of 5.4 trips per week.

The comparison of daily cycling numbers between 2011 and 2015 should be regarded as a rough estimate based on available survey data.

The table below presents state numbers of weekly and daily all-age bicycle trips in 2011 and average days cycled per week in 2015, as well as a comparison of 1985/86, 2011 and 2015 daily bike trip numbers and percentages among cyclists aged 9+. 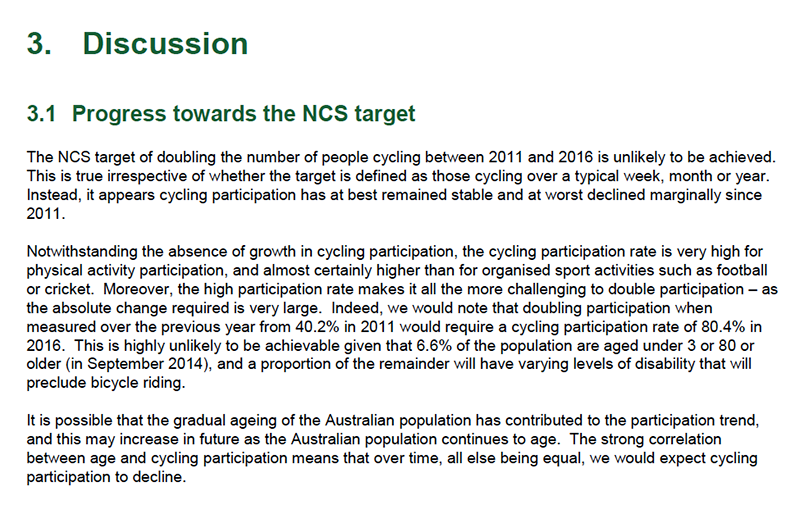 So Australian cyclist numbers remain well below pre-law levels and are expected to worsen. This is acknowledgement that baby boomers who grew up enjoying bikes without helmets are getting too old to pedal anymore and the following generations, who have been discouraged by helmet laws for 25 years, are less likely to cycle in their adult years.

The comparison table below shows the proportional decline in child vs adult daily cycling between 1985/86-2015 and 2011-2015, which demonstrates why the NCP authors believe the demographic shift will result in a continued decline in Australian cycling participation.

Click here for a comparison of daily cycling participation with hospital admission injuries and population growth since 1985/86.

Click here for the Austroads Review of Australia's National Road Safety Strategy, published in February 2015, showing the ratio of overall and life-threatening injury to Australian cyclists has soared since 2001 and is by far the worst among all road users.

Below is an age breakdown of the national participation survey results:

The Roy Morgan participation estimate of 19% is well below the National Cycling Participation 2015 survey finding of 36.3% of Australians cycling yearly, as referenced above. Roy Morgan’s 3.7 million cycling compares to an NCP 2015 estimate of approximately 8.5 million people of all ages who cycled during the year. NCP 2015 results show a decline since 2011 and Australia’s total population increased 17.9% from 2005 to 2015.

The research by Roy Morgan, which claims its survey estimates are among the most accurate in the world, confirms the NCP 2015 finding that the increase is mostly in the 35+ age group, with male baby boomers aged 50+ in particular contributing to the increase. However, cycling by 14-17yo males dropped from 33% of the population in 2005 to 23% in 2015.

Roy Morgan notes: "Twenty-three percent of Western Australians aged 14+ ride their bike either regularly or occasionally, the highest cycling participation rate in the country." WA’s population aged 14+ was 1,880,487 in 2015, of which 23% is 432,512 who cycled.

This can be compared to WA cycling estimates within Bicycle Use and Attitudes to the Helmet Wearing Law published in 1994 by Heathcote and Maisey (WA helmet law enforced July 1992):

The extracts below from Estimated Cost of Bicycle Related Trauma in Victoria and Estimates for Australia, published by VicRoads in 1992, suggest that there were 1,632,000 cyclists in Victoria aged 14 and over in October 1989.

The VicRoads data is confirmed and expanded in the extract below from the Victorian Bicycling Strategy published by VicRoads in 1990, which shows a total of 2,215,000 Victorians of all ages cycling in October 1989.

Victoria's 1989 pre-law cycling participation of 2,215,000 can be compared with National Cycling Participation data (p16) showing an estimated 2,098,500 Victorians cycled at least once during the year in 2015.

From all sources including the National Cycling Participation survey, the Australian Bureau of Statistics and the Roy Morgan research group, the evidence is overwhelming that cycling participation has crashed since helmet law enforcement.

The conclusions drawn on this page are supported by data below showing Australian adult cycling participation (18yo+ and 15yo+) between November 1993, just over a year after the final mandatory helmet law was enforced in Australia, and 2013/14 - according to the Population Survey Monitor and Participation in Sport and Physical Recreation surveys published by the ABS. This includes a 1.3% population proportion downturn in Australian yearly cycling from 2011/12 to 2013/14 which supports the NCP survey finding of a 3.9% decline in yearly cycling from 2011 to 2015.

In May 2017, Austroads and the Australian Bicycle Council published the National Cycling Strategy 2011-16 Implementation Report, which focuses on Trends in serious injury due to road vehicle traffic crashes, Australia 2001 to 2010 published by the Australian Institute of Health and Welfare in conjunction with Flinders University.

The Austroads report confirmed a decline in Australian bicycle sales in 2015 and 2016, as well as a 12% reduction in bicycle imports in 2016, and interpreted the 2001-2010 injury trends contained within the AIHW/Flinders University study:

Overall, and for all of the age groups presented, rates of life-threatening traffic injury sustained as a pedal cycle rider were much higher for males than for females.

The table below is extracted from the AIHW/Flinders University study, showing how cyclists have fared by comparison with other road users in Australia.