Four Canadian provinces - British Columbia, Ontario, New Brunswick and Nova Scotia - passed legislation mandating either all-age or under-18 helmet use in the period 1995 to 1997. Alberta made helmets mandatory for cyclists under 18 years old from May 2002 (see below), an all-age mandatory helmet law was introduced on Prince Edward Island in 2003, Manitoba introduced legislation for <18 mandatory helmets in May 2013 (see below), and Newfoundland and Labrador enforced all-age laws from April 2015.

In 2013, different bike helmet laws applied in each Canadian province and territory:

The analysis of cycling among people aged 12 or older shows that in 2013/14, the percentages who always wore a helmet among people who reported cycling over the past 12 months were:

More children and teenagers than adults in Canada are subject to helmet laws and this is the likely explanation for their bigger percentage reductions in participation.

In October 2015, the British Medical Journal published Bicycling injury hospitalisation rates in Canadian jurisdictions: analyses examining associations with helmet legislation and mode share by Teschke, Koehoorn, Shen and Dennis from the British Columbia and Toronto universities: "We found that lower rates of traffic-related injuries were associated with higher cycling mode shares, a finding also reported elsewhere. We did not find a relationship between injury rates and helmet legislation."

In May 2013, the British Medical Journal published Helmet legislation and admissions to hospital for cycling related head injuries in Canadian provinces and territories: interrupted time series by researcher Jessica Dennis et al from the University of Toronto, finding minimal injury benefit from the enforcement of mandatory bicycle helmets in affected Canadian provinces.

April 16 2007: The Saskatoon City Council has voted unanimously against mandatory bicycle helmets, largely because such a law discourages recreational exercise during an era of record obesity (see also Pedal).

Further research published in the Canadian Medical Association Journal suggests a 62% reduction in cyclist numbers in Halifax the year after helmet law enactment, with more cyclist injuries recorded than before the law and a nominal reduction in head injuries (8 less head injuries in 1999).

As has happened in Australia, New Zealand and America, mandatory helmet use among cyclists in Canada has not reduced cyclist fatalities at any greater rate than among other road users.

The Canadian province of Alberta enforced mandatory helmet laws for cyclists aged less than 18 from 1 May, 2002. The meta-analysis Bicycle helmet use and bicyclists head injuries before and after helmet legislation in Alberta Canada (PDF 1.5mb) published in 2011 by the University of Alberta concluded that the law increased helmet use and decreased head injuries among the target group.

The analysis proved helmet wearing increased among children and adolescents and decreased the number and proportion of head injuries, but dismisses its own key finding of a commensurate proportional decline in cycling participation.

Below is an extract from the analysis showing the declines in <18 cycling in Alberta from 1999 to 2006, despite an increase in cycling among adults who were not forced to wear helmets.

Below are the bicycling rates per hour at specific Alberta sites from 2000 to 2006 for cyclists aged less than 13:

Below are the bicycling rates per hour at specific Alberta sites from 2000 to 2006 for cyclists aged 13 to 17:

Click here for head injury and overall hospital admission rates for cyclists and pedestrians in all Alberta hospitals from 1 April 1999 to 31 March 2007:

Click here for head and overall emergency department rates for cyclists and pedestrians in all Alberta hospitals from 1 April 1999 to 31 March 2007:

Among adults there was an increase in cycling because of the lack of helmet law discouragement but voluntary wearing undoubtedly increased. Adults enjoyed a greater reduction in head injuries compared to participation than did children and adolescents, but also suffered a proportionally greater number of non-head injuries although not as bad as among <18yo.

The following story was published in the Edmonton Sun newspaper on July 12, 2003.

June 2013: The Vancouver Courier reported that cyclists with helmet infringements in Vancouver are not paying their fines, with only 1,771 of more than 13,000 cyclists paying up from 2008 to 2012.

In 2011, Vancouver resident Ron van der Eeden mounted a court challenge against the validity of bicycle helmet laws in British Columbia under Canada's Charter of Rights and Freedoms.

In April 2013, the province of Manitoba enacted legislation enabling mandatory helmet laws for cyclists below the age of 18 from 1 May 2013.

According to the Chief Medical Examiners Office, 27 Manitoban cyclists died in accidents between 1999 and 2008, averaging 2.7 per year. The office states that every year about 140 cyclists are admitted to Manitoba hospital emergency departments with injuries including about 40 with head injuries, or 28.6%. About 60 of the 140 annual cyclist injuries are children aged less than 15.

The Winnipeg Regional Health Authority provides useful information to compare injury data from Manitoba (without any helmet laws) with Western Australia (where all-age helmet laws have been enforced since 1992):

Physical Activity and Sport Participation Rates in Canada 2012 suggests that in 2002/03, about 22% of adults aged 20+ in Manitoba cycled at some time in the three months prior to survey (p7), whereas Australian Cycling Participation 2011 suggests an average 13.3% of adults aged 18+ in Western Australia cycled in the prior week (p48). Across Australia, 17.2% of adults aged 18+ cycled in the prior month and 29.7% in the prior year, which extrapolates to around 20% in the prior three months (p22). The Manitoba and Western Australia estimates are not directly comparable but Australian cycling participation was substantially higher in 2011 than 1992 to 2001 and during the Manitoba survey period of 2002/03. Census Profiles 2001 shows commuter cycling to work aged 15+ in Winnipeg was 2.2% for males and 0.7% for females, while in Manitoba province it was 2.1% for males and 0.7% for females. This compares to Australian work commuter cycling in 2001 of 1.7% for males and 0.5% for females.

Manitoba without helmet laws has/had roughly half the per capita cyclist injury rate as does Western Australia with all-age helmet laws.

The 2013 Winnipeg Bicycle Counts Report from Bike Winnipeg has done 462 surveys at 84 locations in Winnipeg since 2007 during April, May and June, and suggests that commuter cycling in the city has increased 28% since 2007. 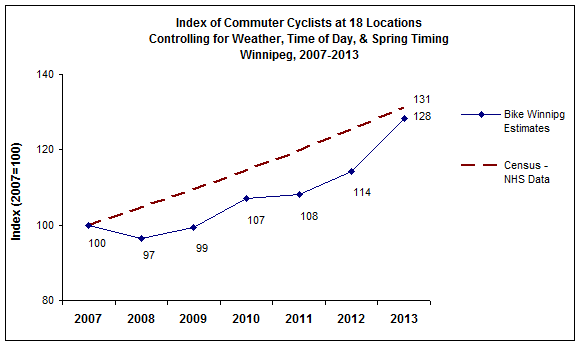 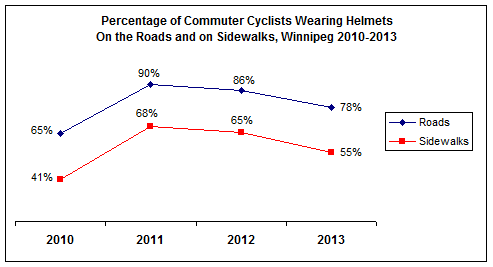 Winnipeg's increase in commuter cycling correlates with the decreased use of helmets since 2011. The 2013 report estimates average daily commuter cycling in Winnipeg (population 714,000 in 2013) at 13,200, which compares with a 2011 Australian Census estimate of 11,758 commuter cyclists in the all-age helmet law state of Western Australia (population 2,239,170 in 2011).

Below is a presentation by Planning and Public Policy Professor John Pucher at Rutgers University, Vancouver, on May 15, 2008: Cycling for Everyone: Lessons for Vancouver from the Netherlands, Denmark, and Germany (video one hour 20 minutes but highly informative : courtesy Simon Fraser University):

Read in the Montreal Gazette (February 18 2008) why a coroner has recommended that helmets should not be compulsory for skiiers in Quebec.