Below is a 1996 media release issued by Bikewest - the cycling promotion and research department of the Western Australia government.

It confirms other survey evidence that more than half the school children in Western Australia had stopped riding bicycles in the five years following 1991.

Based on data from Western Australia, Queensland and Victoria, it was reported in March 2007 that the number of Australian children walking or riding a bicycle to school has plunged from about 80% in 1977 to the current level around 5%.

In 2005 Trends in children’s physical activity and weight status in high and low socio-economic status areas of Melbourne, Victoria, 1985-2001 estimated:

In January 2010 a study by the American College of Sports Medicine found that children who cycle to school are more physically active and fit than those who use other modes of transport:

In October 2015 the 2015 Progress Report Card on Active Transport for Children and Young People showed that 91% of Australian teenagers don't cycle to school at all, with similarly disastrous results for primary school children:

Published in the American Journal of Preventative Medicine in April 2009, Deakin University research shows a link between reduced cycling and Australia's obesity crisis, as reported by the Australian Broadcasting Corporation:

"At the same time the proportion of children cycling to school is now so low it is statistically too insignificant to be considered on its own, says Hume, of Deakin University's Centre for Physical Activity and Nutrition Research. Hume says the decrease in what is known as active commuting has occurred at the same time as obesity rates among children have increased. Although, the researcher says "it is drawing a long bow" to directly link the two, the decrease in walking and cycling to school is part of the overall reduction in physical activity amongst children."

It should be noted that in 1979, 70% to 80% of children in Christchurch, New Zealand, rode their bicycles to school.

New Zealand introduced national, all-age mandatory bicycle helmet laws in 1994. Today, it is estimated that 21% to 35% of Christchurch children cycle to school.

Bicycle helmet laws discourage cycling among children and create the misapprehension among parents that cycling is a dangerous activity.

In the West Australian capital city of Perth, Department of Transport surveys in early 2001 found the following modes of transport used by children to get to and from school in dry weather:

Economic disparity in bicycle helmet use by children six years after the introduction of legislation examines the influence on helmet use of family income levels in different areas within the East York (Toronto) health district of Canada. (ed - The income trend noted in this report is also evident in the West Australian capital city of Perth where most cyclists, including children, ride without a helmet in low income, middle to outer suburbs where law enforcement by police is not apparent.)

Deakin University research published in early 2008 (PDF 70kb) shows that five and six year old children are only half as likely to have weight problems as children without a dog, reflecting the need for recreational activity to reduce obesity. 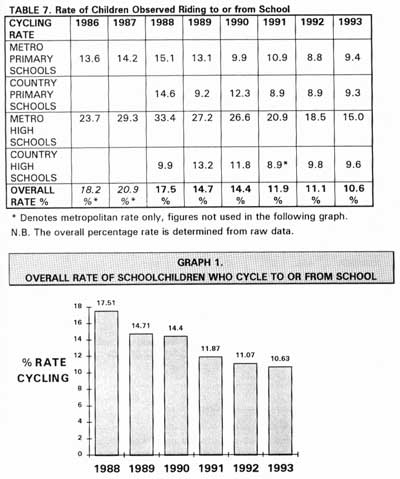 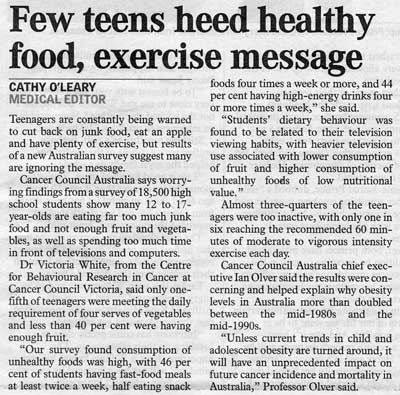 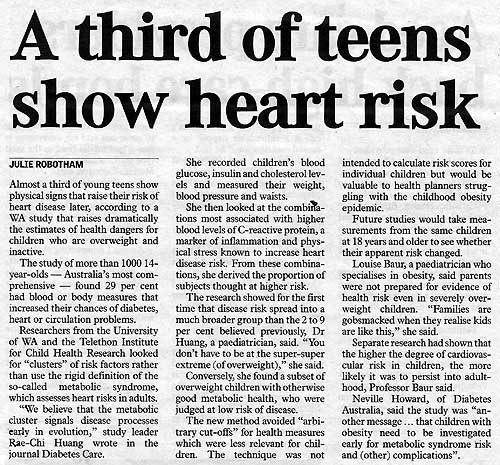