January 2020: The Australian Health Tracker shows rates of obesity and overweight in 2019 as:

December 2018: A Senate Select Committee inquiry into the Obesity Epidemic in Australia published its final report, reacting to 2014-15 studies showing that more than a million Australian children and 63% of adults were overweight or obese - the fifth highest level among 22 OECD countries.

The report makes clear the committee has attributed the epidemic almost entirely to dietary factors, justifying its recommendations for increased regulatory controls such as a 20% sugar tax, greater food labelling and restrictions on televised advertisements for fast food.

In line with academic beliefs, it appears committee members think the diets of Australians were far healthier until a few decades ago and did not contain abundant levels of sugars and fats.

The report contains few references to the sedentary modern lifestyles of Australians who, due to technology, no longer have daily exercise when they travel, wash dishes or clothes, heat their homes, cook food, change channels on their televisions, maintain their gardens, etc. These were once minute-by-minute activities which used to "burn off" their dietary excess of sugars and fats.

Bicycle riding used to be one of the most common forms of recreational exercise, particularly among children whose weight strongly influences their risk of being fat when they grow up, and the committee has failed to recognise that punishing people for cycling without a helmet is a contributor to Australia's obesity epidemic.

All research papers warn of worsening rates of obesity in Australia with much of the blame attributed to our increasingly sedentary lifestyle. The number of fat West Australians increased 25 per cent in the 10 years to 2010.

Data published by the Western Australia Health Department in 2018 show the following proportions of obese adults in the state since 2002:

The Sunday newspaper reporting the overweight statistics above editorialised that they "seem at odds with the increasing numbers of people we see wearing fitness watches, going to the gym, jogging, walking and riding bikes". These editorial observations again reflect how out of touch the media is with the catastrophic decline in Australian cycling since the early 1990s (see National Cycling Participation survey data).

Australia is one of only two countries in the world with national all-age helmet laws which discourage one of society's most popular, healthy, safe and enjoyable forms of recreational transport and exercise - bike riding. In June 2008, research at Melbourne's Baker IDI Heart and Diabetes Institute found that Australia is now the fattest nation on earth. Download Australia's future fat bomb (PDF 2.3mg).

Research published by Deakin University in October 2009 shows that Australian pre-school children spend 85% of their waking hours inactive. One in seven Australians will be suffering type 2 diabetes by 2050, according to a study also published in October 2009 by the University of Canberra's National Centre for Social and Economic Modelling.

Australians who wish to exercise frequently by cycling are punished if they don't use uncomfortable, inconvenient and potentially dangerous helmets, and as a result many choose not to exercise.

Australia now challenges America in having the greatest proportion of obese citizens. About one in five children in Western Australia is considered obese and it's predicted that 75% of Australia's adult population will in some way be overweight by 2020. About 60% of all Australians are classified as overweight or obese.

A report published in 2007 by the Public Library of Science-Medicine (PDF 216kb) shows that just 15 minutes of moderate to vigorous physical activity per day reduces the odds of obesity in 12 year old boys by 50% and in girls by 40%.

According to the Heart Foundation, more than 54% of West Australian adults were overweight or obese in 2009 and the proportion almost doubled from one in 10 to one in five people from 1995 to 2008. Western Australia enforced mandatory bicycle helmet laws in 1992. The National Preventative Health Taskforce estimates that from 1990 to 2005, the number of overweight or obese Australians rose by 2.8 million to affect more than half the population. Curtin University professor of health policy Mike Daube believes obesity will prematurely kill half a million Australians by 2050 if left unchecked.

Obesity is linked to various ailments including cardiovascular disease, diabetes, cancer and reduced quality/duration of life.

Walking, Cycling, and Obesity Rates in Europe, North America, and Australia published in 2008 by the Journal of Physical Activity and Health spotlights the clear link between cycling activity and reduced obesity. The chart below shows that the three most obese countries in the world, the US, Australia and Canada, have either mandatory child or adult bicycle helmet laws:

Similar comparison graphics show the world's four most obese countries with the least active travel - the United States, New Zealand, Australia and Canada - are also the only countries that punish either children or all ages for cycling without a helmet:

In May 2006, Australia's National Health and Medical Research Council warned that about 100,000 people each year (275 per day) are developing diabetes in Australia, doubling their chance of dying over the next five years. Research published in June 2008 by St Vincent's Hospital in Melbourne predicts that as many as 30,000 people in Western Australia with type 2 diabetes will die within 10 years. About 700,000 Australians have diabetes and the disease is expected to kill about a third in the next decade. Exercise is one of the best ways to prevent diabetes. Canberra is urging Australians to undertake moderate exercise, but Australia is one of only two countries in the world that punishes its citizens of all ages for cycling exercise without a helmet.

The Australian Bicycle Council, a subsidiary of the Australian Government's Department of Transport, stated in its March 2004 communique:

Bicycling is part of the solution to many of our cities (sic) problems: the obesity epidemic, traffic congestion, air pollution and more. The mainstream health message these days is that people need to do at least 30 minutes of moderate physical activity on most days, to maintain health. Increased incidental exercise (ie exercise that is built into 'activities of daily living') is often recommended as the best way to ensure adequate daily levels of exercise are achieved. This is because this kind of exercise is often 'maintained' (ie kept up) more consistently than, for example going to the gym or playing sport. Walking and cycling to work are two good forms of incidental exercise - no surprise there!

A 1996 Western Australia government media release states that more than half of Western Australia's children had stopped riding bicycles to school within five years of helmet law enforcement.

This website does not claim that Australia's obesity crisis is caused by helmet laws and their consequent reduction in cycling popularity.

However, it certainly doesn't help to discourage cycling when the medical profession recommends cycling to improve fitness and lose weight.

You cannot convince people to enjoy society's most popular form of recreational exercise, cycling, if they risk being punished for not wearing a helmet when it's 35-40 degrees Celsius - typical summer heat in Australia.

March 21, 2012: Australian children are among the most ''cosseted'' and ''chauffeured'' in the world with a study showing more than 60% are driven to and from school and the numbers who walk, cycle and take public transport are falling to new lows.

For an overview of the health benefits of cycling, read this 2005 Denmark study (PDF 276kb). For an amusing Danish view of the helmet debate, click here. 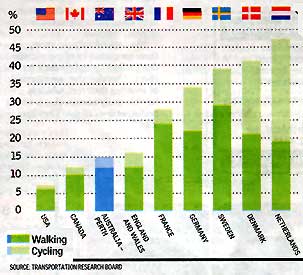 This graph sourced to the Transportation Research Board
and The West Australian newspaper shows the
percentage of walking and cycling for urban transport
in various western countries. The three countries
with the worst ratio of cycling are the only ones that
impose mandatory bicycle helmet laws. 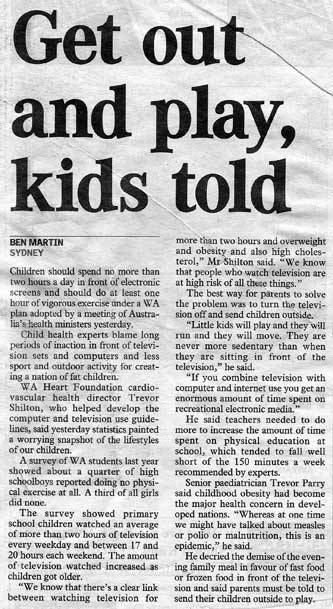 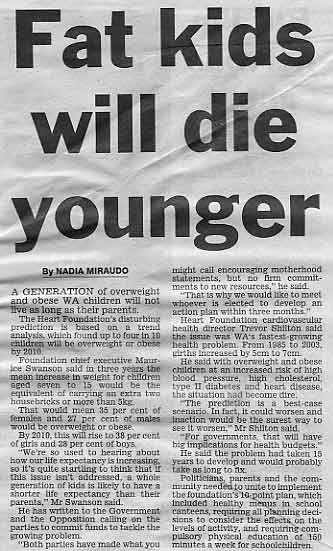 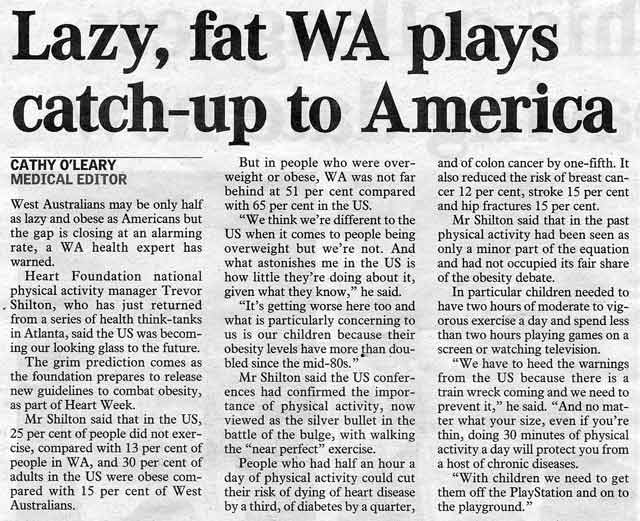 The West Australian newspaper
May 2, 2006 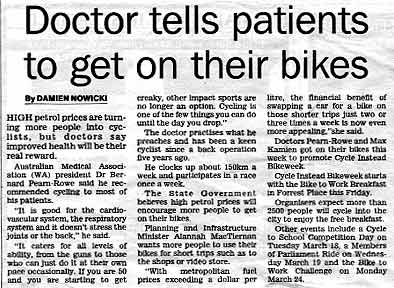 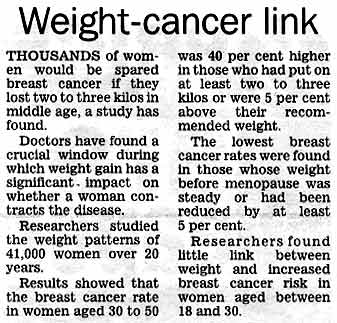 The West Australian newspaper
May 4, 2003 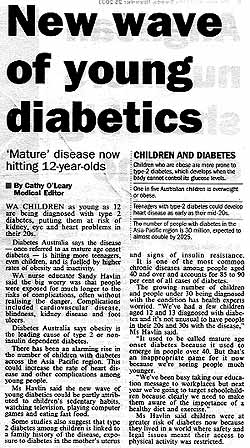 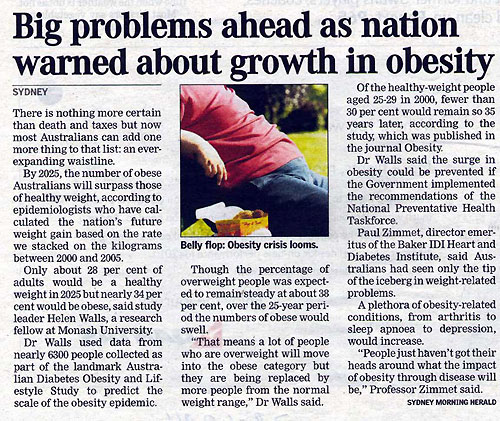 Wear a baseball cap or choose a new hairstyle? 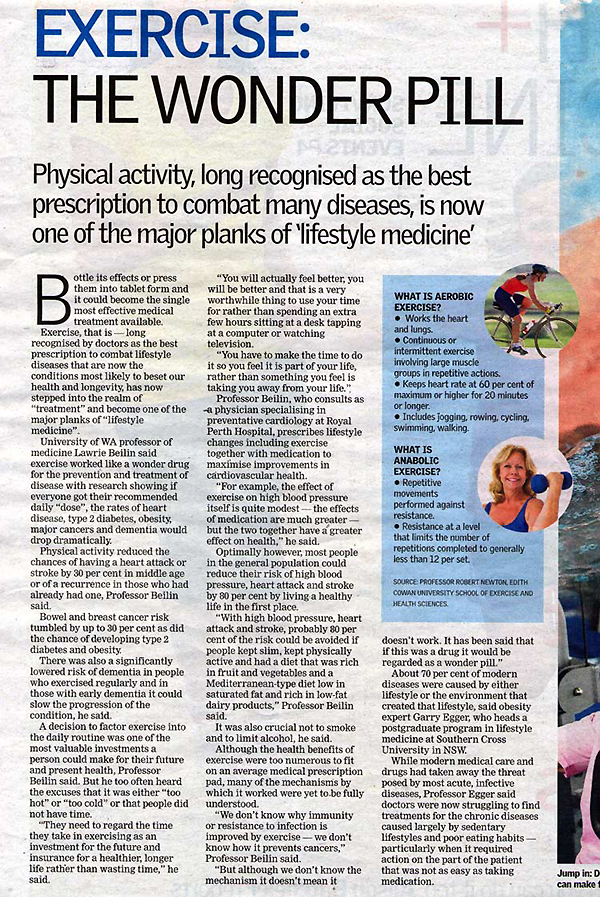